Imagine a rough mountainous countryside on a cold winter’s day and a rugged Norwegian Viking on skis hauling his collected wood for his fire. Some people may believe that cross-country skiing or Nordic combined skiing is a current innovation, but it is far from new. Yes, the modern skies we use today actually originated from Norway and there are ancient rock drawings to back this up. In fact, archeologists discovered an old rock painting dating back to 4000 BC showing a man on skis with a stick in his hand.

In 1927, rock carvings thousands of years old were discovered on the Norwegian island of Rødøya. One drawing displays a hunter who is obviously wearing a rabbit mask. He appears to be gliding on a pair of very long skis. They have also uncovered, in the peat bogs of Scandinavia, hundreds of ancient skis in excellent condition.

The word ski even comes from Norwegian origins and stands for “skid.” In Old Norse wording, it means stick of wood or cracked and split piece of wood. 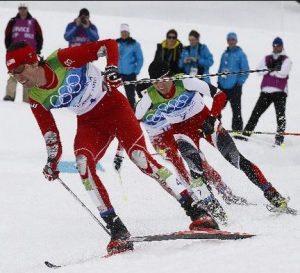 It’s certainly true that skiing was an essential form of travel for early Nordic peoples during the long, snowy, cold winters. Skis were mainly used in these ancient times for simply ease of traveling and purely functional reasons. It wasn’t until the mid 1800s that skis starting becoming used for sport. The first ever documented skiing training and competition was for military purposes. They practiced the sport doing downhill races on difficult terrain and doing target practice wearing a weighted backpack.

I feel the Holmenkollen Ski Festival is also important to mention in Nordic combined skiing history as it was a very famous event that started in up 1892. It quickly gained popularity and starting drawing in skiers from close surrounding countries. In the 1920s King Olav V of Norway even participated in the event! Holmenkollen is the name of the huge jumping hill situated in Holmenkollen in Oslo, Norway. Fittingly named I would say.

The opening large-scale competition was in 1892 in Oslo which then transitioned into the 1924 Winter Olympics and has been in the plans ever since.

This article was posted in A Look Back. Bookmark the permalink. Follow comments with the RSS feed for this post. Both comments and trackbacks are closed.