More on the Origins

Skiing was such an integral and fundamental part of the Norwegians way of life that they even worshiped and honored a ski god and goddess! Today many towns and villages in Norway and Sweden carry the remnants of those bygone pagan beliefs in their names. Why, the very name Scandinavia may refer to the goddess of skiers, Skade.

While skiing has been a necessary part of Nordic life for centuries, the popularizing of Nordic combined skiing as an international sport had to wait until the 19th century. At that time Norwegians improved the traditional skis by shaping, tapering, and refining them. They also developed a system of heel straps and toe straps that were the forerunners of modern binding systems. In Telemark, a mountainous area of south-central Norway, they soon initiated a series of competitions. The first recorded and timed cross-country ski race is believed to have been held there, with the winner covering the three-mile course in about 30 minutes. Cross-country ski racing and ski jumping became popular in northern European countries soon thereafter, but it was another event that introduced it to the rest of the world.

In 1888 the Norwegian explorer and scientist Fridtjof Nansen led an expedition across Greenland on skis. Fridtjof was an amazing and talented explorer that led many fascinating expeditions. He subsequently wrote a book about his experience that in 1891 was translated into English, French, and German. The account, which described his grueling journey across the stark Arctic landscape, captured the imagination of its Victorian readers. It stirred romantic notions of conquering the untamed wilderness. His tale enthralled and fascinated many and caused an increase in interest in the sport.

In the 1960’s, family ski touring was organized and launched on a major scale. Ski centers that specialized in cross-country skiing began to spring up. Manufacturers took note, and new, sophisticated equipment appeared. Fashion even entered the picture, making cross-country skiing chic. The demand by the public for areas in which to ski saw many municipalities scrambling to groom any available land, including golf courses and city parks. 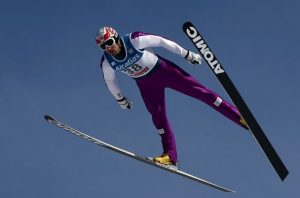 This article was posted in A Look Back. Bookmark the permalink. Follow comments with the RSS feed for this post. Both comments and trackbacks are closed.